A must-watch! In this 30 minute sermon, H.G. Bishop Raphael, Secretary of the Coptic Orthodox Holy Synod, explains the characteristics of Orthodox worship, and contrasts this with Evangelical Protestant “praise and worship”.

H.G. Bishop Antony of Ireland, Scotland and Northern England concludes:
“Unfortunately Pentecostal and Protestant thought has entered our Church by means of servants. And unfortunately it has entered our Church by means of priests. And it is being spread. And right now when anyone says anything they say you are closed-minded, etc. To the extent that we’ve now come to the point where we have the ‘Better Life’ team and Sameh Maurice, the Pastor of El Dobara [Evangelical Church]; he comes here and [people say] “We all went to his gathering!” What is this? Why? And not just this, even the priests attend! And participate in the gathering! Whereas the verse says, “And have no fellowship with the unfruitful works of darkness, but rather expose them” [Ephesians 5:11].” 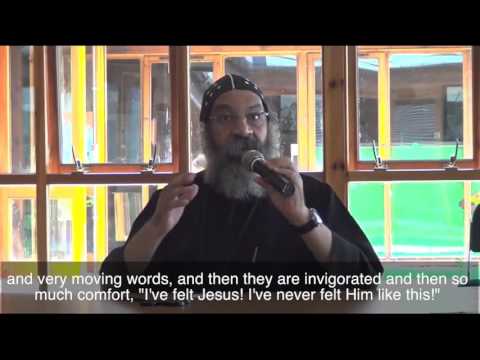